Shedding some light on LED Lighting 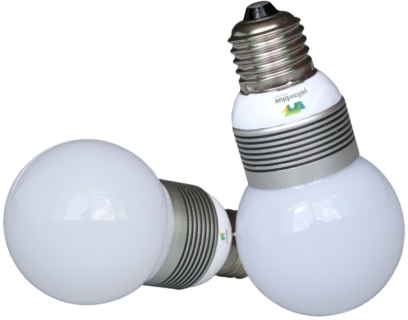 By definition, a light-emitting diode (or LED) sounds pretty complicated. It is a two-lead semiconductor light source capable of emitting light when electrons release as photons.

By practice, LED lighting is pretty simple. Making the switch to LED lighting in your home is one of the easiest ways to save money on energy bills.

A look at the benefits

LEDs have been around for almost 50 years, but continue to grow in popularity as people become more aware of their benefits.

At 28 to 150 lumens per watt a lamp lives between 25,000 and 100,000 hours; LEDs use between 30 and 60 milliwatts to operate. They are incredibly energy efficient, especially when used in small spaces or for short distances.

They create light by electroluminescence, which occurs when material emits light in response to the passage of an electric current or to a strong electric field.. The result is that electrons work to fill negatively charged electron holes. As electrons pass through, they emit photons, producing light.

LED Lighting: a small change that can make a big difference

Some might say LEDs are a fad or a passing trend, but here at Yellowblue we know it is here to stay. Most lighting changes in a home are fairly simple and require little work. For a small expense and labor you can make a big impact on your electric spend right away.

Energy Star qualified LED lighting uses at least 75 percent less energy than incandescent lighting and lasts 35 to 50 times longer. They produce very little heat, helping to reduce cooling costs in the summer months as well. They are more durable than bulbs and come with a minimum three-year warranty.

The United States Energy Information Association reports that in 2015, about 404 billion kilowatthours (kWh) of electricity were used for lighting by the residential sector and the commercial sector in the United States.

Specific to residential properties, about 145 billion kWh, or about 10 percent, of electricity consumption is from lighting, the report said.

A look at the history

As LED technology continues to advance, its roots date back to the 1960s, when scientists and engineers focused their research efforts on semiconductors.

The discovery of LED is credited to James R. Biard and Gary Pittman, who in 1961 were working on an X-band GaAs varactor diode when a state-of-the-art infrared detector revealed a bright light that would become known as LED.

The first LEDs sold for $130 each, a far cry from the affordability and availability of LEDs today.

As an industry leader in energy efficient products, Yellowblue has partnered with dealers across the country to offer state-of-the-art retrofit LED lighting. To learn about our LED lighting solutions, please contact us to locate an authorized independent dealer near you.

The lights speak for themselves, but here is a review of some of the most prominent benefits of using LED lighting in your home:


Go Back
Get a FREE Estimate!
Close [x]